Q & A with the Maestro

We spoke with the Maestro about conducting, quarantine, and Omaha—read more about how Ankush Kumar Bahl is making use of his time during physical distancing and why Omaha excites him. 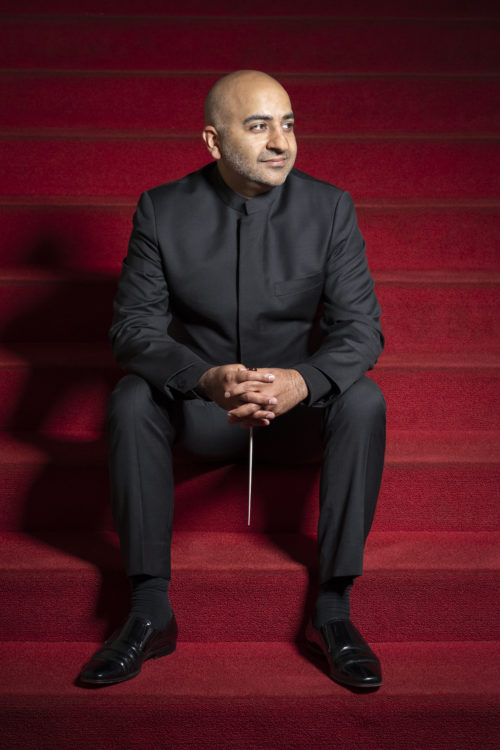 When did you know you wanted to be a conductor?

Conducting came to me later in my musical education and life. I did not conduct until age 21 but quickly gained experience in a very fertile learning environment while in college. During these concerts and other musical experiences in college, I realized that I needed music to forever be a part of my life – but was not sure what exactly that would or could look like. While continuing to grow as a musician, then ultimately deciding to fully pursue music as a career, it was conducting that I knew would be the best conduit for me to make music with my peers and share my passion with audiences.

The exact moment occurred as I was walking alone down a small dirt road in Maine during the summer of 1999 in between sessions during a conducting workshop.

What instrument did you train on before you became a conductor?
My first instrument was percussion at age 4! I then picked up the violin because my brother played it. After a few years of that, I started the French horn in fourth grade and it became my primary instrument through college. Along the way, I continued the violin but also picked up the piano and trumpet.

What are your specific passions within the classical music world?

One of the many passions I have within classical music is the desire to help our product reach as many people as possible. Primarily to give them the opportunity to realize that classical music is, in fact, for them as well! In order to achieve that goal, I am focused on making the packaging as welcoming and accessible as possible. That focus translates to making music approachable in the concert hall, taking the orchestra out of the concert hall, connecting with organizations across the community, and being an extremely visible (and audible!) part of the city and greater region.

What other projects are you working on?

Besides keeping up important relationships with a few other orchestras through guest conducting, the Omaha Symphony will be my musical priority. Outside of conducting, I love being with my wife and twin boys and am often involved in many of their projects as a result!

Have you made any discoveries (musical or otherwise) during this strange physical distancing time we’re going through?

I have tried to be productive during this time by (in part) starting a website with a few conducting colleagues called Everything Conducting. It is designed to be a free (and growing) resource to help conductors of many different ensembles, of different levels, and at different parts of their careers navigate many different parts of conducting that don't always get addressed by their primary conducting teachers. So, by writing and reading many articles I have learned a great deal and discovered some great information from some wonderful authors!

You’ve performed with us before – what surprised you most about Omaha?

The commitment to the orchestra and to other arts organizations in this city was something I have never seen before, on any level. It was inspiring and motivating. Of course, the orchestra was at the highest level, as was the performing arts center, but I had heard those facts prior to my first week with the orchestra and they were simply confirmed during my weeks with the orchestra. But to go back to my first impressions, I immediately sensed an unmistakable sense of pride and ownership of all things Omaha and was most impressed by this.

What drew you to Omaha and to becoming the new Music Director of the Omaha Symphony?

All parts of the organization are top notch and exactly what I have been looking for. I truly believe that it is a perfect fit! Of course what you see on stage is an incredible product – with excellent musicians, soloists, and conductors performing at an international standard – to be sure. However, you also need to know that the people behind the scenes (who make it all happen) were exceptional. It was very quickly clear that (should I be offered and accept the position), I would have fantastic partners with whom I could work with, build, and advance the mission of the Omaha Symphony – so when they offered the position, it was truly a no-brainer.

How would you describe an orchestra’s role in serving its community?

My goal is to make symphonic orchestral music part of a thriving and diverse community through inclusion and innovation. Omaha is an incredibly rich and diverse community of professionals, artists, dancers, chefs – you name it! They are also incredibly supportive and curious about the arts. I can’t imagine an orchestra existing in such a city without engaging with these individuals on a regular basis. Whether that means regular collaborations with local arts organizations, sharing concerts with local musicians, or presenting concerts all over the city and state; I would envision the Omaha Symphony as a nimble organization supremely relevant in this growing community.

We're excited to see you back in the concert hall once it's safe—check out our incredible Centennial Season!