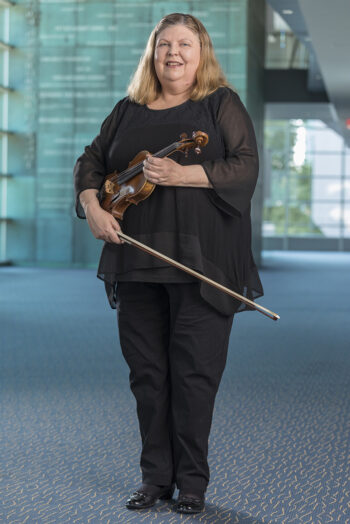 Phyllis Duncan has been a full time violinist with the Omaha Symphony since 1984. A native of Iowa, she earned her Bachelor's degree in violin performance and education from the University of Iowa in Iowa City where she studied with Dr. Don Haines. During her first year of pursuing a graduate degree, she won her first orchestra position with the Shreveport Symphony. While in Shreveport, she regularly drove to Dallas to study with Motoi Takeda, Associate Concertmaster with the Dallas Symphony. Two years later, in 1984, she won the position in Omaha.

Other playing endeavors include the Bedford Springs and Bear Valley Summer Music Festivals, the Cedar Rapids Symphony, the Quad-City Symphony (Davenport, Iowa), the Des Moines Metro Opera, the Lincoln Symphony, as well as teaching violin at the University of Nebraska-Omaha School for Strings. In May 2012, she returned to her hometown to appear in a concert celebrating the Ottumwa Symphony's 25th Anniversary as one of four soloists playing the Vivaldi Concerto for 4 Violins, in B minor.