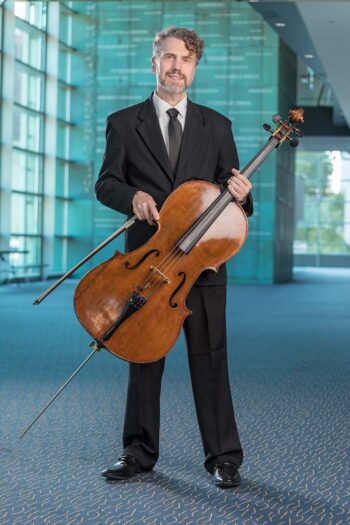 Paul Ledwon is currently principal cellist of the Omaha Symphony, a position he has held since 1999. His frequent solo
appearances with the orchestra have included works by Haydn, Schumann,
Shostakovich and Tchaikovsky.

Ledwon began his musical training at the age of four on the piano and
violin, discovering the cello a few years later. He studied with Hans
Jorgen Jensen at Northwestern University, earning his Bachelor of Music
with Distinction and his Master of Music with Program Honors. While a
student at NU, he performed recitals annually in Evanston and in
Detroit, for the Detroit Institute of Arts' subscription concert series.
He was also a frequent soloist with Chicago area orchestras including
the Northwestern and North Shore Chamber Orchestras, and performed at
the master classes of such cellists as Anner Bylsma, Harvey Shapiro,
John Sharp, Paul Katz, Lynn Harrell, and Mstislav Rostropovich. At this
time, Ledwon was principal cellist of both the NU Symphony and the
Chicago Symphony Civic Orchestras, as well as a substitute with the
Chicago Symphony Orchestra. His summers included performing as principal
with the Schleswig-Holstein (Germany) and Pacific Music Festival (Japan)
orchestras.

As a recipient of the prestigious Deutscher Akademischer
Austauschdienst (DAAD) fellowship, Ledwon continued his studies with
Martin Ostertag at the Hochschule fuer Musik in Karlsruhe, Germany.
During his three years there, Ledwon performed as a soloist with and
principal of the Hochschule Orchestra and subbed frequently with the
Suedwestfunk (SWF) Orchestra in Baden-Baden and the Suedwestdeutsches
Kammerorchester in Pforzheim. As a chamber musician, he performed
regularly in Karlsruhe, and attended summer sessions at the Sibelius
Academy in Helsinki, Finland. An avid performer of contemporary music,
he performed with the Karlsruhe contemporary music ensemble, touring
Brazil and South Korea and participating in recording the works of
Wolfgang Rihm with renowned conductor Peter Eotvos. Ledwon received his
Artists Diploma from the Hochschule with the highest possible marks, an
achievement of which he is extremely proud.

Since returning to the U.S., Ledwon has also been a member of the
Milwaukee Symphony Orchestra and has served as principal cellist for the
South Bend Symphony, Elgin Symphony, and Chicago Opera Theater
Orchestras. Since 1997 he has spent summers in Door County, Wisconsin,
as principal cellist of the Peninsula Music Festival.