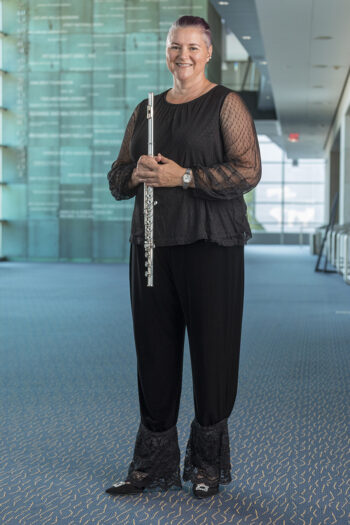 Colleagues and critics alike regard flutist Maria Harding as an “artistic anchor” and “a truly remarkable musician”. She is one of today’s most notable orchestral flutists, receiving much attention for her beautiful tone and her expressive, colorful phrasing.

As a soloist, at age 18 she was awarded first prize in a competition sponsored by the National Flute Association. She also took top awards at the McCarty Young Artists’ Competition and the Myrna Brown Competition. The Yamaha Corporation quickly took note of her talent and named her a Young Performing Artist, and later an Artist/Clinician. Through this program she currently serves as a visiting musical coach in university programs and summer festivals across the country.

Maria enjoys a large and lively private teaching studio, with students ranging from beginners through emerging professionals. She hopes to perpetuate the caring guidance she received from her own fine teachers: Margaret Redcay (early studies), Bonita Boyd (Eastman School of Music), Bradley Garner and Jack Wellbaum. (Cincinnati Conservatory of Music)