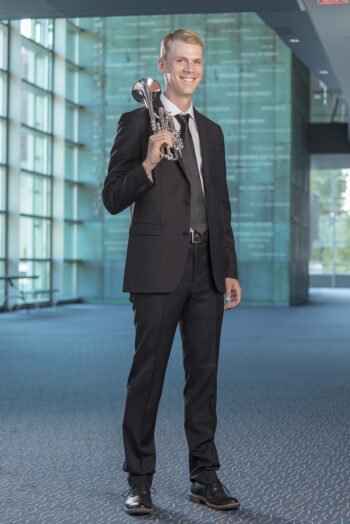 Chris Haas is an active performer and educator in the Iowa City area. A native of Nauvoo, Illinois, Chris joined the Omaha Symphony Orchestra as Section Trumpet in 2018, and frequently performs with symphony orchestras throughout Illinois and Iowa, including the Quad City Symphony Orchestra, Peoria Symphony Orchestra, Skokie Valley Symphony, and Park Ridge Symphony. In addition to performing, Chris was also the primary trumpet teacher at Lake Forest College from 2017 to 2019.

He received his Bachelor of Music from Western Illinois University in 2013, and completed his Masters of Music from Northwestern University in 2015. As a student at Western Illinois University, he placed second at the International Trumpet Guild Orchestral Excerpts competition, performed as a national finalist in the Music Teachers National Association Young Artists Brass competition, and was a semifinalist in the National Trumpet Competition Undergraduate Solo Division. His primary teachers were Dr. Bruce Briney and Robert Sullivan.