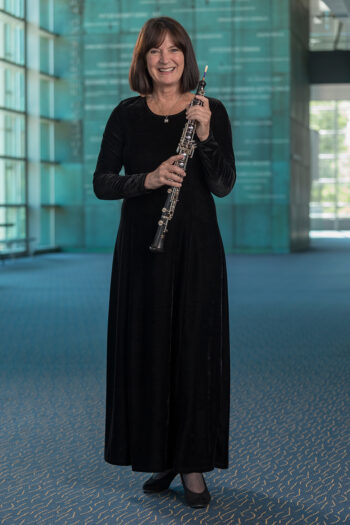 Alexandra Rock, originally from upstate New York, began her oboe studies at the Eastman School at age 14. After receiving her Bachelor of Music from Ithaca College, she joined the Orquesta Sinfonica del Estado de Mexico, in Toluca, Mexico. In 1982 she returned to the U.S. to study with Elden Gatwood of the Pittsburgh Symphony, and Joseph Robinson of the New York Philharmonic. Ms. Rock joined the Omaha Symphony in 1983 and is currently their Principal Oboist. Other orchestral positions she has held include five years as principal oboist with the Des Moines Metro Opera, and English hornist for the New York Virtuosi Chamber Orchestra, Tri-Cities Opera Company, and Binghamton Symphony Orchestra.

Ms. Rock has appeared as soloist with the Omaha Symphony on several occasions, including performances of Honegger’s Concerto de Camera, Albinoni’s beautiful Oboe Concerto Opus 9, and the very challenging Oboe Concerto by Leon Goossens. She is a featured soloist on “Stardust”, an award-winning CD of lullabies for children by Cher and Gene Klosner. She enjoys playing chamber music, having performed with the Omaha Chamber Music Society and on several Omaha Symphony Chamber Music programs. Ms. Rock has been on the faculties of Nebraska Wesleyan University and Dana College, and maintains a small studio of private oboe students. She has two wonderful daughters, Jane and Catherine.