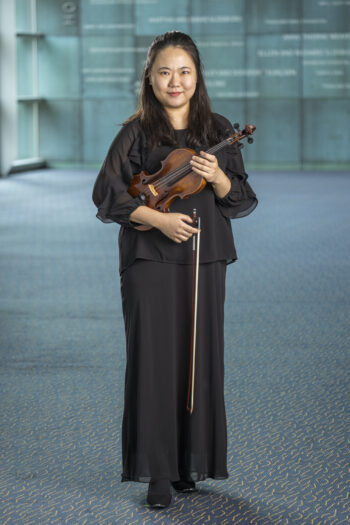 A versatile and enthusiastic musician, Ms. Cho has continued to enjoy her musical career of solo, chamber music, teaching artist, and orchestra musician appearances throughout North America and Asia. A native of Seoul, South Korea, Ms. Cho started playing violin when she was just four years old. As a soloist, she has earned numerous invaluable experiences performing with renowned orchestras including the Seoul Philharmonic Orchestra as her debut at age eleven, as well as the Jeonju Philharmonic Orchestra, Korean Chamber Orchestra, Sejong soloists Concert, Seoul National Symphony Orchestra, Manhattan Soloists Ensemble, and the Duxbury Festival Orchestra.

In 2015, she won the Mozart Classical String Competition in New York City and was able to use that stepping stone to make her debut in the United States with the Manhattan school of music string chamber orchestra, by performing Mozart Violin Concerto D Major. She has won top acclaimed prizes from the Cynthia Woods Mitchell Young Artist Competition, the Duxbury Music Festival Concerto Competition, and The Chamber Music Competition. Moreover, Ms. Cho has performed solo recitals and chamber music concerts at the at the Seoul Arts Center and Kumho Arts Hall in South Korea, and in various venues throughout the United States and abroad, including Weill Recital Hall at Carnegie Hall, Kaufman Music Center. As a chamber musician, she has performed in festivals such as the San Francisco Music Festival, Vianden Music Festival, Musetica Festival in Zaragoza Spain, the Texas Music Festival, and the Duxbury Music Festival. Additionally, she actively participated in a Masterclass with the Calidore String Quartet at the Lincoln Center Chamber Society. Through her strong abilities to work well with her peers, she was able to take part in a Masterclass from concertmasters including Glenn Dicterow, Sheryl Staples, Emanuel Book, Jorja Fleezanis, Alexander Barantschik, Rainer Küchl, and Vesko Eschkenazy. As an orchestra musician, Ms. Cho has earned her place to play under the baton of renowned conductors including Herbert Blomstedt, George Manahan, Leonard Slatkin, Japan van Zweden, Daniel Harding, Gustavo Dudamel, Marin Alsop, and Esa-Pekka Salonen.

At the age of ten, Ms. Cho began her intensive studies at the Korean National University of Arts Pre-college Division and went on to receive her bachelor's degree at Seoul National University as an honor student, under the tutelage of Ju-Young Baek. After this accomplishment, she focused her ambitions on a new challenge and moved to the United States to pursue her master of music degree and professional studies certificate, at the Manhattan School of Music, under the tutelage of Lucie Robert, with a full scholarship, respectfully. In 2019, Ms. Cho earned an Artist Diploma in Orchestra Performance with full scholarships while studying with the former concertmaster of the New York Philharmonic Glenn Dicterow and Associate Principal, second violin group Lisa Kim of the New York Philharmonic. It should be noted that she was the first student ever to earn an Artist Diploma of Orchestral Performance Program at the Manhattan School of Music in its one hundred-year history. Furthermore, since 2015, as a teaching artist, she was one of the founding members at Garden States School of Music In New Jersey, where she has taught, led directions, and coached, with her goal to help form younger generations of students.