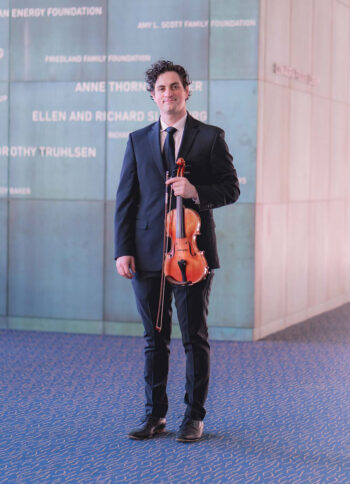 An avid chamber player, Alan studied closely under the Pacifica Quartet and the Takács Quartet and has recorded two chamber music albums, one as a member of the Chicago Panamerican Ensemble called, “Voices of Mexico’s Past and Present” and one with pianist, Joanne Chang called, “Dialogos.” Both albums explore the rich landscape of classical music in Mexico. Alan also served as First Violin of the Eykamp String Quartet from 2018-2021. This past 20-21 season, the Eykamp String Quartet spearheaded a series called, “Connect and Celebrate: New Traditions,” which featured over a dozen composers of color and women composers over the course of 9 recitals in Evansville, IN. Additionally, Alan is an active chamber music coach, having served on faculty at the Anchorage Chamber Music Festival, the University of Evansville Music Department, and the Evansville Philharmonic Youth Orchestra.

Recent solo engagements include performing Piazzolla’s Four Seasons and the Brahms Double Concerto as soloist with the Evansville Philharmonic Orchestra, performances at the New Harmony Music Festival, a radio broadcast on Chicago WFMT Radio, solo and chamber recitals at the University of Evansville, and guest appearing at the Chicago Latin Music Festival.

A Chicago native, Alan participated at Midwest Young Artists for nine years, where he received intensive orchestral and chamber music training. He studied with Gerardo Ribeiro at Northwestern University before receiving his Bachelor of Music degree from Indiana University under Sibbi Bernhardsson of the Pacifica Quartet and Alexander Kerr, concertmaster of the Dallas Symphony Orchestra.